A Decade In Commodities: Arabica Coffee Roasts The Competition In Softs

It has the most fascinating story of the soft commodities complex, rising from 13-year-lows to become the darling of the space for this decade, all within seven months. 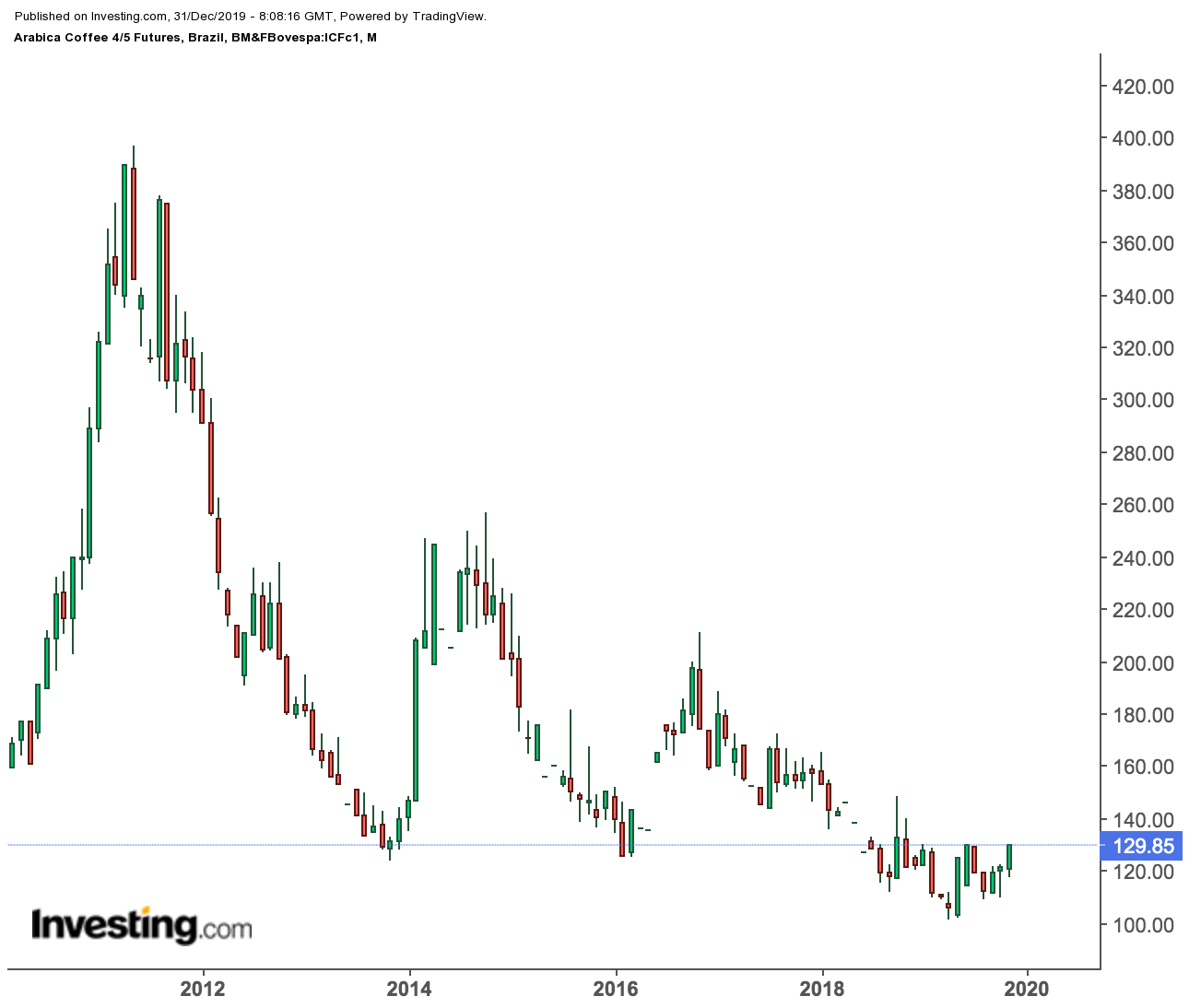 It’s not like losing your shirt, for sure. Yet, it’s not a great investment either, considering the negative return on something you’ve held for 10 years.

New York-traded arabica is this year’s greatest performer in softs — a bucket of commodities that includes , , and . However, arabica’s move for the decade is also relatively flat. That’s the disparity of the arabica story.

Yet, arabica holds its own against the London-traded and Vietnamese-grown robusta. While robusta is up 6% on the decade, it is also down 9% for 2019.

The worst performer of the softs complex for both the year and decade is orange juice, which lost 24% on both measures from good growing weather and production. Orange’s crash is a juicy story, of course. But our focus here is the rollercoaster ride that was arabica and what transformed it into a winner.

Just over a year after starting the decade, arabica hit record highs of $3.06 a lb in May 2011. The rally came as inclement weather in top producing country Brazil severely crimped global supplies. A growing taste for coffee over tea in Asia also fueled demand.

It was the era of caffeine, with prices of coffee sold in both cafes and store shelves actually rising, probably the only time ever during the decade. A large steaming cup of Joe, for instance, went up anywhere from 5 to 20 cents. In stores, almost all roasted coffee brands, from Maxwell House to organic blends, saw price hikes as well.

“I’ve been here for five years, and this is the most significant increase,’’ Dave Maffucci, a barista at Peet’s Coffee and Tea in Wellesley, Massachusetts, said then.

Few business owners reported a decline in sales or customer backlash from the 2011 price hikes. As stated earlier, it was coffee’s era — or perhaps those who drank it were loyal and/or addicted.

Even so, from those highs, arabica futures traded in New York fell as much as $2 a lb or 66% as bumper crops prevailed in later years out of Brazil. The market then reached its nadir, hitting a 13-year low of 86.35 cents a lb in April, and looked like it was going to have another dispirited rest of year, as monthly losses continued through August.

Then, in September, came the rebound that built into the fairytale comeback that was arabica.

In the September-December period alone, arabica beans surged 36% altogether, wiping out losses from earlier in the year, for the best quarterly performance since 2014. It was also the biggest gain among major commodities in the last three months.

Arabica rallied late in the year after adverse weather threatened production in Brazil, the world’s top grower and exporter. Analysts began predicting the market would shift into a supply deficit, helping to drive the rebound. But the size of the gains was surprising as a measure of commodity market volatility surged to the highest in more than four years. That’s lent a cautious tone to the outlook for early 2020.

“The market ran up too much, too fast,” Josh Graves, a senior market strategist for RJO Futures in Chicago, was quoted as saying by Bloomberg. “In the short term, high volatility is here to stay.”

Here’s what traders will be keeping an eye on in 2020, according to Bloomberg:

Brazil’s end-of-season inventories are set to drop to the lowest in data going back to 1962, the U.S. Department of Agriculture estimates.

It’s also still unclear how big next season’s Brazilian harvest will be, with some expectations for a record crop. Rainfall has been excellent, well distributed in most of the nation’s producing regions, Regis Ricco Alves, director at RR Consultoria Rural in Alfenas, Minas Gerais, said by message.

Even if prices have peaked in the short term, they may climb by the second half of next year, according to Aakash Doshi, a director for Citigroup in New York who says prices could break above $1.60 in 2021. Tracey Allen, an agricultural commodity strategist for JPMorgan Chase said that while prices are going to see ups and downs, they could move to $1.59 in the medium term.

Coffee demand continues to see new growth thanks to the popularity of cold drinks, especially in the U.S., the biggest consumer, said Jim Watson, senior market analyst for Rabobank in New York. Trendy cold brews also use more beans than their hot counterparts because it involves a longer process that extracts less caffeine than when made with hot water, spurring bigger raw material use, he said.

The recent price surge for arabica beans isn’t likely to hurt demand for or company profits, because the spike hasn’t been sustained, Watson said.

Coffee roasters and chains typically lock-in prices ahead of time and they’re not likely to “feel much of an issue yet,” said BTIG analyst Peter Saleh. That’s good news for consumers who may not see prices go up significantly for some time.

Rudy Giuliani says he is willing to ...