While an increase of almost $20 per barrel may seem significant, the overarching story of the year is why prices did not rise more dramatically in 2019 given crippling sanctions on Iran and Venezuela and geopolitical events in the Middle East. 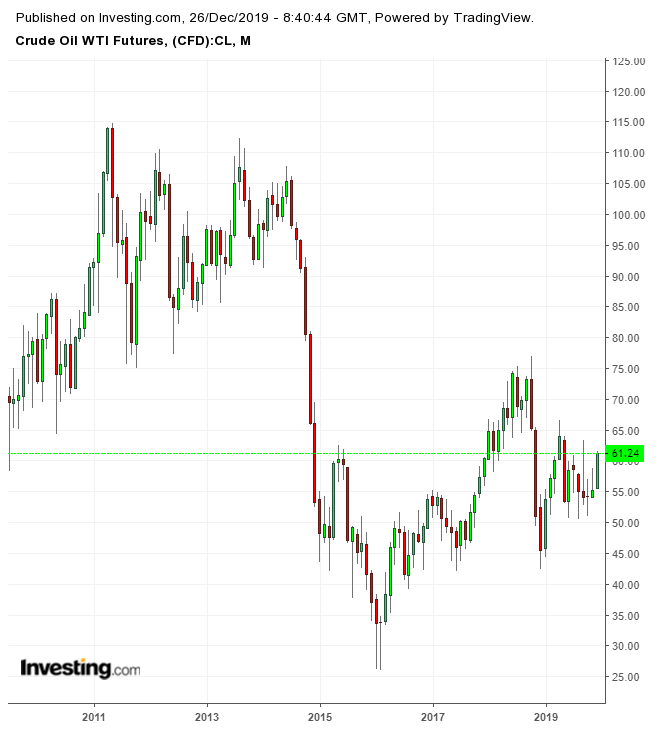 So, why the ‘limited’ gains? The additional four biggest oil market stories of the year help explain the lag.

This was the most influential oil market story of the year. No matter what else was happening—a drone attack on Saudi Arabia, new U.S. oil sanctions or tanker attacks at the Strait of Hormuz—the fear of a global recession kept oil prices largely in check.

These concerns were fueled by the escalating trade war between the U.S. and China and reports of negative economic indicators from Europe, Asia and North America. Now that the trade war is de-escalating and a Phase One trade deal is supposed to be signed in early 2020, oil demand is expected to pick up.

The second most important factor that kept oil prices in check this year: U.S. oil production. According to the EIA, U.S. output reached a record high of 12.8 million bpd last month.

Despite declining rig counts and tougher financial situations for fracking companies, there was record high production because the industry focused efforts on drilling in the most prolific and least expensive areas. Also, producers drilled longer laterals to stave off reservoir decline, more pipeline infrastructure came online and advances were made to the chemical solutions used in fracking.

The EIA predicts that U.S. production will average 13.2 million bpd in 2020, but many analysts believe this is much too optimistic and financial issues along with faster decline rates will hinder U.S. production growth in 2020.

OPEC and its partners attempted to restrict oil production in 2019 to raise oil prices, but their efforts proved largely ineffective. Saudi Arabia consistently cut more oil production than it had to under its OPEC commitment, but these efforts were largely undercut by overproduction from Iraq, Nigeria and Russia.

The group seems primed for a repeat in 2020. OPEC and OPEC+ committed to deeper cuts for the first quarter of the new year. Saudi Arabia again pledged to cut more than required, but Russia is already poised to disregard its commitments. Despite OPEC’s policies, the market was unresponsive in 2019 and it is doubtful the outcome will be more favorable in 2020.

5. Iran’s Attack On Aramco Had No Impact

When Aramco’s Abqaiq and Khurais facilities suffered an attack in September, all oil production through the facility was brought to halt. Although oil prices spiked briefly, they quickly returned to pre-attack levels when Aramco (SE:) restored supply faster than most market watchers expected.

Some analysts asserted that the attacks would usher in a new “risk premium” for oil prices, but the market proved that assertion false as well, remaining focused on weak economic growth indicators and the prospect of slowing oil demand growth. Geopolitical threats will probably continue to be shrugged off, at least for the first half of 2020 when demand is unlikely to expand.

A Decade In Commodities: In Base Metals, ...