Now that prices have fully recovered from the threat of escalating aggression between the U.S. and Iran, here are four important issues that will influence oil prices and market dynamics in the near-term and long-term:

Brazil’s energy minister, Bento Albuquerque, announced that the nation is seriously considering joining OPEC in 2021 and will begin discussions during his upcoming visit to Saudi Arabia In July.

Apparently Brazilian oil producers expressed concerns about OPEC membership in 2020 because the decision would mean cutting oil production to comply with the OPEC+ policy. Brazil seems optimistic that the production cuts will end by 2021 even though OPEC and Russia are actively working to extend the cuts—set to expire in March—through June 2020 and possibly through December 2020.

In November 2019 Brazil’s oil output hit a record high of 3 million bpd, a level which would make the nation OPEC’s fourth largest producer, after Saudi Arabia, Iraq and the UAE. While Brazil’s oil production is dominated by the national corporation, Petrobras (NYSE:), there are also a number of independent Brazilian oil companies and foreign International Oil Companies (IOC) participating that would make joining OPEC challenging.

This obstacle stems from the fact that over 1 million bpd of the nation’s oil output is not controlled by Petrobras, but is spread amongst at least 25 companies, many of whom develop oil concessions in conjunction with IOCs like Equinor (NYSE:), BP (NYSE:), Shell (NYSE:) and Chevron (NYSE:).

Adding to this issue, Brazil hopes to attract more foreign companies to develop its offshore oil resources. Its last offshore concession auction was considered a flop, with many companies shunning the auction altogether, so the possibility that future production could be subject to OPEC quotas and production cuts would add another reason for foreign oil firms to steer clear from investing in Brazil’s oil resources.

Brazil’s president and energy minister may seek to join the oil cartel, and OPEC would certainly benefit from Brazil’s membership. However, the potential pitfalls to Brazil’s future oil production will likely outweigh any benefits.

Saudi Arabia and Kuwait share oil production along a swath of land and sea between the two countries called the Neutral Zone.

Production in this area has been halted since 2015, due to disputes between the nations. In December, Saudi Arabia and Kuwait finally signed an MOU (memorandum of understanding) to resolve these clashes and restart production. Kuwait’s Assembly voted yesterday to ratify the agreement with Saudi Arabia, eliminating yet another hurdle.

Production in the Neutral Zone could restart as soon as March 2020. Oil fields in the region have the potential to add as much as 500,000 bpd to the global market eventually.

However, even if the Neutral Zone does start pumping in a few months, don’t expect full production anytime soon. According to Chevron, which co-manages the onshore Neutral Zone’s Wafra oil field with Kuwait Gulf Oil Co., full production from that field won’t be back online for at least a year.

The coronavirus, a highly contagious respiratory ailment that has already infected hundreds of people in China, is drawing comparisons to the SARS outbreak in 2003. In late 2002 and early 2003, China’s GDP fell by an estimated 0.5% to 2.0% because of that SARS outbreak.

That epidemic slowed air travel and caused jet fuel demand to drop significantly enough that China’s overall oil demand was affected. Many analysts are using the SARS epidemic as a benchmark to anticipate the coronavirus’s impact on China’s oil demand. In anticipation of less fuel use in China, both Brent and WTI dropped by over 2% on Wednesday. 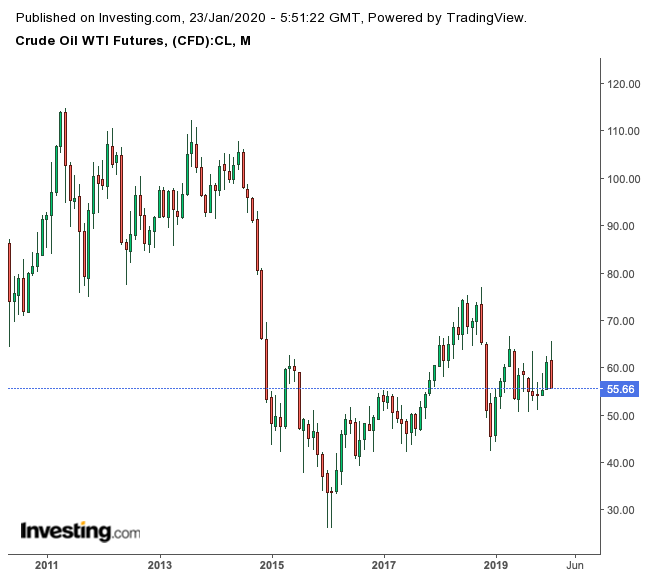 In fact, it is now being reported that Chinese authorities have shut down all bus and subway transportation in the capital city of Wuhan province, where the outbreak is centered. They have also reportedly closed train stations and airports as of Thursday morning in China.

Important differences remain between the situation in 2003 and the current one that suggest oil demand may not be as adversely affected by coronavirus.

First, SARS was deadlier—killing about 10% of those infected. Coronavirus has led to pneumonia, which can be fatal, but media reports that the virus itself does not appear to be as deadly as SARS.

Second, China has been employing a different energy strategy for the last five-plus years, importing more oil than it is consuming and sending a large portion to fill massive storage facilities. As a result, a drop in jet fuel and gasoline demand may not show up in China’s total crude oil demand numbers if the country continues to import the same quantities and simply funnel unused crude into its massive storage facilities.

From China’s perspective, a temporary drop in fuel consumption from its population is no reason not to continue to take advantage of low oil prices to stock up on crude.

The conflict between General Khalifa Haftar, the head of the Libyan National Army rebel group and the UN-recognized Libyan Government of National Accord (GNA) is now weighing on Libya’s oil exports.

General Haftar, whose forces control access to much of Libya’s oil production and export infrastructure has ordered all exports halted in order to exert pressure on the GNA, which receives all of the revenue from Libyan oil production. According to TankerTrackers.com, Libya exports a little over 1 million bpd, mostly to Italy, Spain and Singapore.

When news of the stoppage hit markets on Monday, the price of Brent jumped 1.8%, but quickly came back down. So far, the Libyan national oil company has continued to pump oil, but it is being held in storage tanks rather than exported. Once the storage tanks fill up, the company will have no choice but to cut production, perhaps to a mere 72,000 bpd.

Attempts at mediation have proved unsuccessful. Given the fact that Haftar’s actions have had virtually no influence on global oil prices, global leaders are less concerned now about the possible impact on the global economy. Haftar’s oil disruption could, potentially, stop about 1% of the global production, but markets are much more concerned right now with the prospect of falling demand from China and the IMF’s disappointing 2020 global outlook.