4 Global Events That Could Influence Oil Prices This Year

A combination of dynamic factors generally drive markets: geopolitics, policy and fundamentals. While the fundamentals can be measured, and their changes tracked, there is no way to consistently forecast global events, including policy and geopolitics, despite the fact that they lend themselves to long-term forecasts, though many ultimately prove to be wrong.

Still, there are four influential global developments that oil traders should watch for in 2020 because they may happen. And if they do, they could impact oil markets.

China’s high demand for imported oil has been a mainstay of the market for the past several years. Since 2015, the nation frequently expanded its storage. This strong appetite was instrumental in keeping oil producers from falling even further in 2015 and 2016. 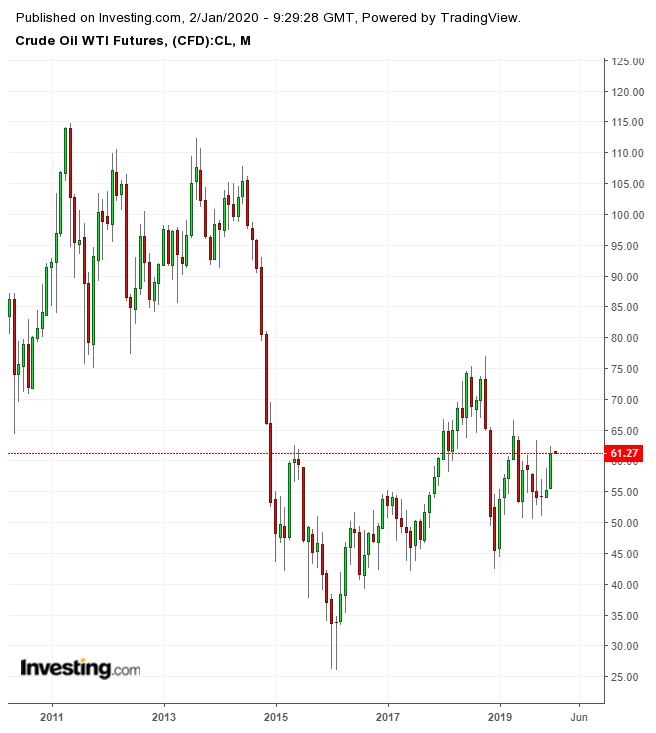 Now, there are signs that China’s economic growth is slowing. A real possibility emerges the Chinese government could decide to stop building additional oil storage and tamp down on imports, either because of the slowing or in order to divert funds for other economic stimulus.

A more drastic possibility: China could decide to dip into its storage and import less oil than its market demands. The two countries that sell the most oil to China—Saudi Arabia and Russia—would be hit most directly if Chinese imports drop. However, a drop in Chinese demand would also send the price of oil down globally and U.S. producers would feel the effects acutely. As China and the U.S. continue trade negotiations, this is a potential trick in China’s arsenal.

Political unrest in southern Iraq has been mounting since late September. Recently we have seen increased violence from Iraqis protesting government corruption and the rising Iranian influence in Iraq’s affairs.

Escalating tensions and violence are likely to impact Iraq’s oil industry. While in 2018, Iraq was the fifth largest oil producing country in the world, it is likely in fourth position now after producing a record 4.88 million bpd this past summer. However, on Dec. 28, 2019 protesters shut down an oil field that produces 90,000 bpd and now the potential for disruption to Iraq’s oil production and exports is even higher since pro-Iranian militias are threatening U.S. positions and the U.S. is also using air strikes.

Even though Russia just agreed to extend the OPEC+ production restraint deal and deepen its output cuts for the first quarter of 2020, it is already talking about getting out of the deal. Last week, Russian oil minister Alexander Novak told Russian TV that 2020 might be the right time to re-evaluate Russia’s participation in the production cut agreement and potentially end its cooperation with OPEC.

The multi-country production cut deal hinges on Russia, as OPEC has been unable to reach any type of consensus these days without Russia’s presence and participation. Withdrawal from the OPEC+ arrangement would likely cause oil prices to drop as the incentive for most OPEC producers to curb oil production will be gone.

In November 2020, voters in the United States will cast their ballots for president. Republican President Donald Trump is running for reelection against a to-be-determined Democratic candidate.

Right now, it is still too early to know how the U.S. electorate will vote, but if it looks like the Democratic candidate might win the election, the market could respond in one of two ways. Either, we will see an increased value in oil because of expectations that U.S. production will decline with a Democrat president. Most of the candidates running for president on the Democrat ticket actively espouse anti-oil and rhetoric.

On the other hand, the market generally views President Trump as a positive sign for and may perceive a likely Democrat victory as a negative sign for expansion and thus expect oil prices to decline. If President Trump seems likely to be re-elected for a second term, oil price momentum should remain stable.