When oil prices were heading to $80 per barrel last summer, it took a few phone calls and an announcement from OPEC and Russia to stabilize the market. The current reality presents an entirely different picture, with prices threatening to plunge into the $40s and dipping into the $50s.

We are regularly seeing prices swing three to four percentage points intraday based on nothing more than passing comments from U.S. President Trump on trade relations with China, while markets hardly react when an influential oil minister from OPEC speaks. 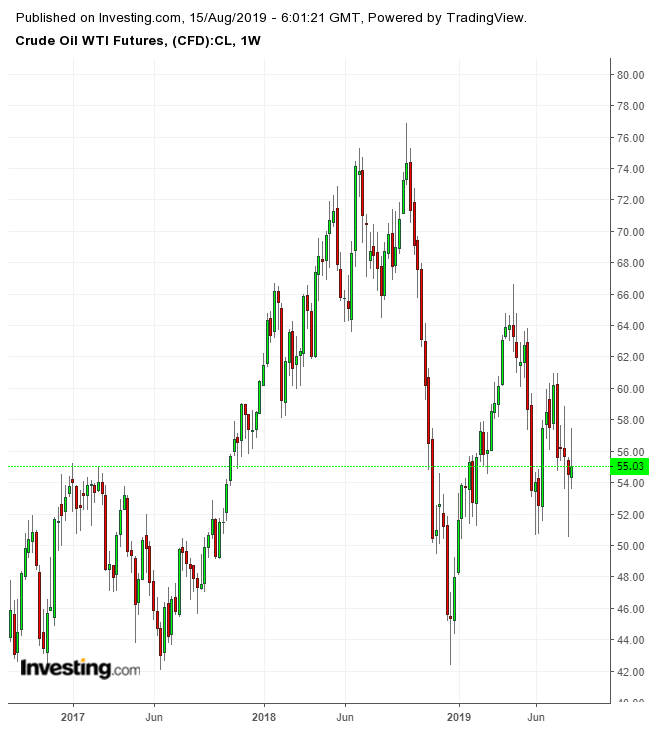 This week, oil markets once again proved that they are run by speculation about the future of oil demand, which will be heavily influenced by whether or not the U.S. and China resolve their trade dispute. Oil jumped when President Trump disclosed his plan to delay implementation of some of the new tariffs on Chinese goods from September until mid-December.

These are the only measures of current supply and demand fundamentals that appear to have an impact on the market. When the EIA unexpectedly announced that stocks in the U.S. rose by 1.6 million barrels last week, oil prices trended down. Crude oil production remained steady at 12.3 million barrels per day. Two weeks ago, a surprise draw pushed prices up but only by less than a dollar a barrel. Last week, rose nearly 2% on news that European oil stores had dropped.

Any potential sign of a recession or global economic slowdown is moving all markets, including oil. On Tuesday and Wednesday, this came in the form of declining growth numbers for and the emergence of inverted yield curves for and U.S. Treasury bonds. This is traditionally, but not always, a sign of an impending recession. For oil, the fear is that a recession will cause a drop in demand.

Oil markets are largely ignoring traditional factors, because of concern and speculation about the future of the global economy. In particular, the market is ignoring the following:

1. Aggression In The Persian Gulf

A few weeks ago, Iran a British-flagged tanker in the Persian Gulf after British authorities in Gibraltar seized an Iranian oil tanker bound for Syria. Oil prices barely reacted when Iran to arrange a tanker swap. Tension in the Persian Gulf remains high, and the threat of attacks by the Islamic Revolutionary Guard Corps (IRGC) on tankers traversing the Strait of Hormuz is still real. Under typical circumstances, geopolitical tensions and military activity in the Persian Gulf would push oil prices up. However, today’s oil market is unfazed.

OPEC countries, especially Saudi Arabia and the UAE, have issued strong statements suggesting that OPEC will to try to support oil prices from falling further. However, other than Saudi Arabia, none of the OPEC countries have provided concrete statements regarding production cuts. Typically, OPEC talk can help lift prices, even if only temporarily, particularly when there is an upcoming meeting. Despite the JMMC meeting for OPEC in Abu Dhabi less than a month away, talk of a 1 million barrel per day cut appears to have no impact on current prices.

However, in this market,