OPEC and OPEC+ will meet next week to assess the state of their production restriction agreement and determine whether to extend it to June.

The last time the group met, this past June, the result was an extension of the agreement through March 2020. OPEC freed itself from some of the pressure of the coming December meeting with that 10 month extension, instead of the typical 6 months. This move may have been designed to avoid a price upheaval along the lines of the sell-off that occurred last December.

In spite of the reduced pressure, the upcoming meeting is expected to reveal the increasingly diminished ability of OPEC and OPEC+ to influence the market and how it might react. Here’s what to watch:

Last year OPEC lost Qatar as a member, and in 2016 Indonesia exited the group. This year, Ecuador is expected to depart after formally announcing its plans to leave in October because it needs to produce more oil than is permitted under OPEC quotas.

While not a major OPEC producer, the withdrawal of Ecuador is a bad sign for the oil cartel’s strength and relevance as an organization. Ecuador only produces about 540,000 bpd at present, but the fact that small oil producers no longer see membership as beneficial is a sign of OPEC’s inability to manipulate oil prices. In the past, the advantage for smaller producers was the collective impact on the oil market. Although it is unlikely there will be a strong reaction to Ecuador’s departure over the long-term, OPEC’s power to move oil prices will plunge further if and when more small producers depart. 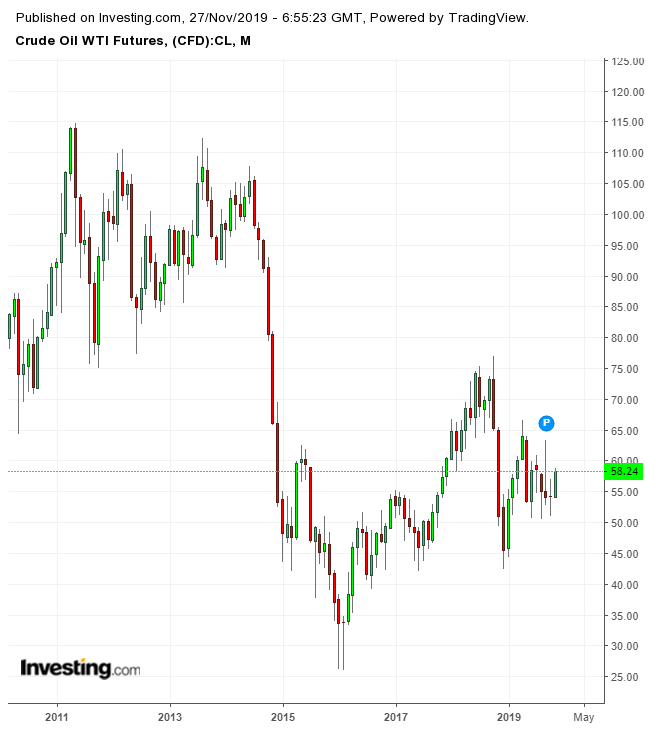 OPEC will report only slightly better compliance rates at technical meetings on Dec. 4th and 5th. Last month, S&P Platts, which monitor’s the rate of compliance with production quotas by OPEC producers, reported a drop to only 142%. This only includes OPEC members with quotas, which Libya, Iran and Venezuela do not have. Several OPEC members were producing less than their quotas—Algeria, Angola, Kuwait and Saudi Arabia—while Nigeria and Iraq continued to significantly over-produce.

Saudi Arabia greatly increased production from September when it had to be slowed after the attacks on Abqaiq and Khurais, but still remains below its quota. Oil minister Prince Abdulaziz bin Salman already confirmed that Saudi Arabia will produce the same amount of oil in November as it did in October—9.86 million bpd.

However, Iraq decreased its production slightly. Argus reported that oil fields in southern Iraq that are run by state-owned Basrah Oil have only been operating at 25% capacity in November. It is likely that OPEC will continue to pressure Nigeria and Iraq to decrease their oil production to comply with quotas, but will likely have minimal success. Market watchers should not expect any major price moves as a result of either the JTC (joint technical committee) or JMMC (joint ministerial monitoring committee) meetings.

3. No Consensus Without Russia

The expectation is that OPEC and OPEC+ will not make changes to the quota system currently in place and will roll over the cuts through June 2020. The current quotas last through March 2020.

Some within OPEC may desire deeper cuts or think that the dismal demand forecast for 2020 necessitates them, in order to keep a floor on prices, but OPEC is essentially unable to reach any consensus without Russia—a nation unlikely to promote or accept such changes to the current system in place. While benefitting from deeper production cuts on mega-producer Saudi Arabia and the rest of OPEC, Russia keeps its own cuts to a minimum. For example, in September it exceeded its quota of 11.18 million bpd, producing 11.25 million bpd. After being admonished at the September JMMC meeting, oil minister Alexander Novak promised that Russia would improve its compliance, but only lowered its October oil production to 11.23 million bpd.

Market watchers can expect Russia to continue such behavior, particularly during the winter months when Russian oil production is difficult to regulate.