$3 Hit To Oil From Coronavirus? Goldman Says Yes. Here’s Why

In any crisis, it’s good to have as many facts in hand as possible for contingency planning. Thus, Goldman Sachs’ prophecy that oil prices could lose $3 per barrel from the new coronavirus that’s finally arrived in the United States is a necessary, even if alarming, prediction to know.

Goldman’s analysis of the impact from the 2019-nCoV — shorthand for the virus — is based on its study of the fallout to from the SARS epidemic that began in Asia and shook the rest of the world in 2003.

A 17-year-old example for a present day crisis? Yes, because it’s the only one available and the most relevant, says Goldman, which has more pedigree in oil than any Wall Street bank.

“While estimates at this point remain highly uncertain and we take no view on its development, we leverage the 2003 SARS epidemic to illustrate the potential impact on oil demand,” it said.

“Such a demand impact (without an OPEC supply response) would point to an only $3/bbl impact on oil prices, although the initial high uncertainty could lead to a larger sell-off, as was the case in March 2003.”

Interesting. That means oil could even dip by as much as $6 per barrel — as it did at the height of the SARS epidemic in 2003, based on historical Investing.com data — before OPEC does something drastic to pull the market back higher. 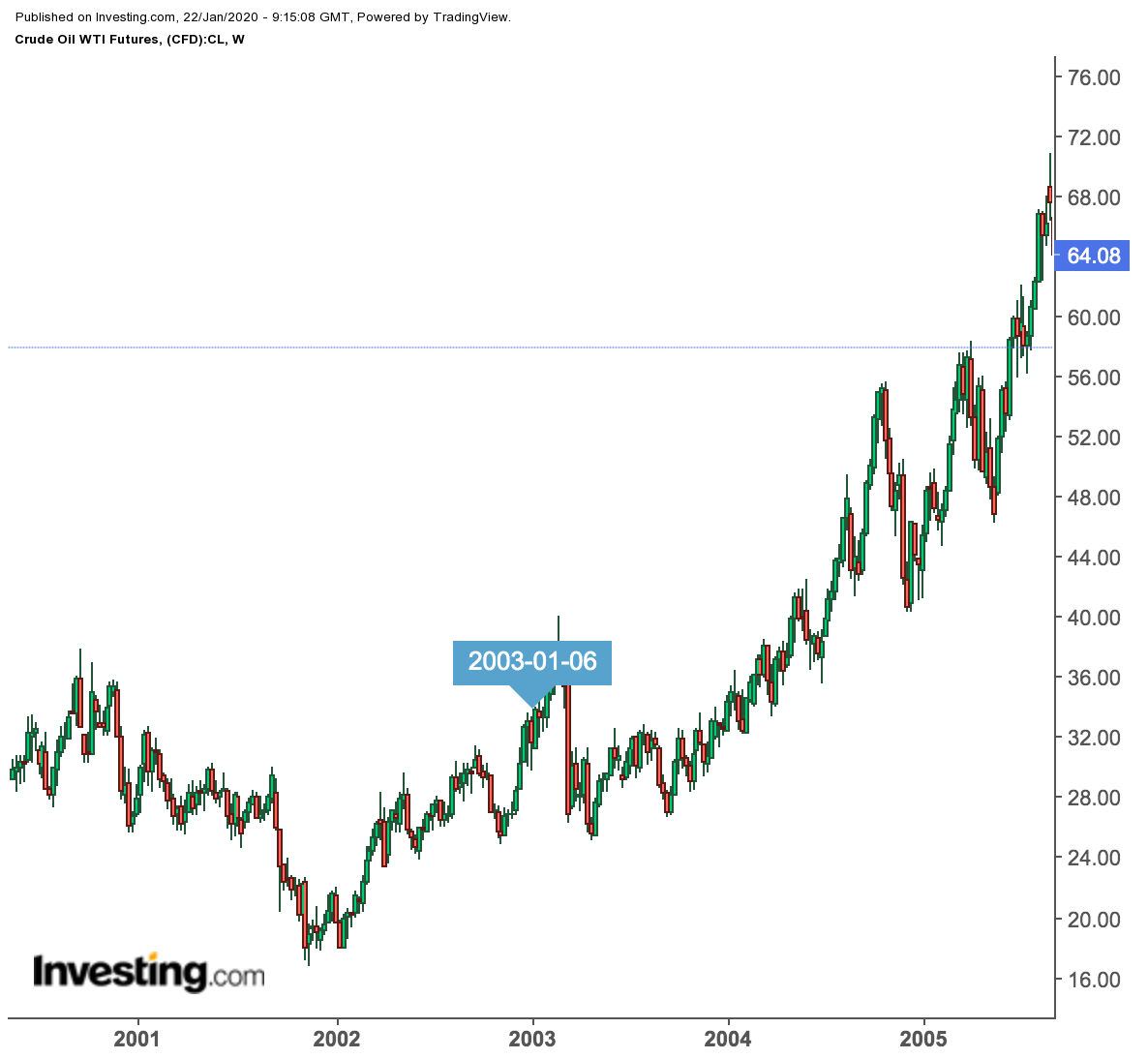 The year SARS hit was a volatile one for oil, although prices did not go above $40 or below $25 for a barrel of , which was then the global crude benchmark before the preeminence of in 2010.

A Bloomberg chart from 2003, shared across oil trading desks on Tuesday as the first U.S. case of the 2019-nCoV was made known, stressed the same point about the near 40% downswing in WTI that year.

Worst SARS Hit On Oil Was 17% Loss In A Month

“Looking back at the SARS epidemic, this uncertainty indeed left markets and forecasters initially pricing and assuming a much larger impact than eventually occurred, with oil down nearly 20% at its trough,” Goldman said.

“This elevated level of fear ultimately subsided when the pace of new cases reported slowed, with a total duration of the epidemic outbreak of 5 months, before a quick recovery in regional activity.”

Breaking down the potential impact from the 2019-nCoV, Goldman anticipated a 260,000-barrels-per-day negative shock to global oil demand on average, including a 170,000-bpd loss of jet fuel demand.

Goldman said the biggest hit on real energy demand might be to jet fuel as air travel declines.That was the case in 2003, when jet regrade, the relative strength of jet fuel prices versus gasoil, declined in March 2003, the Wall Street bank said. It added:

“We would expect similar price responses this time, with jet cracks and regrade both already selling off as of Tuesday. The pressure on jet cracks could in fact be exacerbated by the current high level of jet refining yields, jet’s recent outperformance relative to distillates in the U.S. and Europe and above seasonal distillate inventory builds so far this year.”

Fears that the China-originated 2019-nCoV could disrupt travel and commerce, and slow economic growth sent a chill through global risk markets on Tuesday. 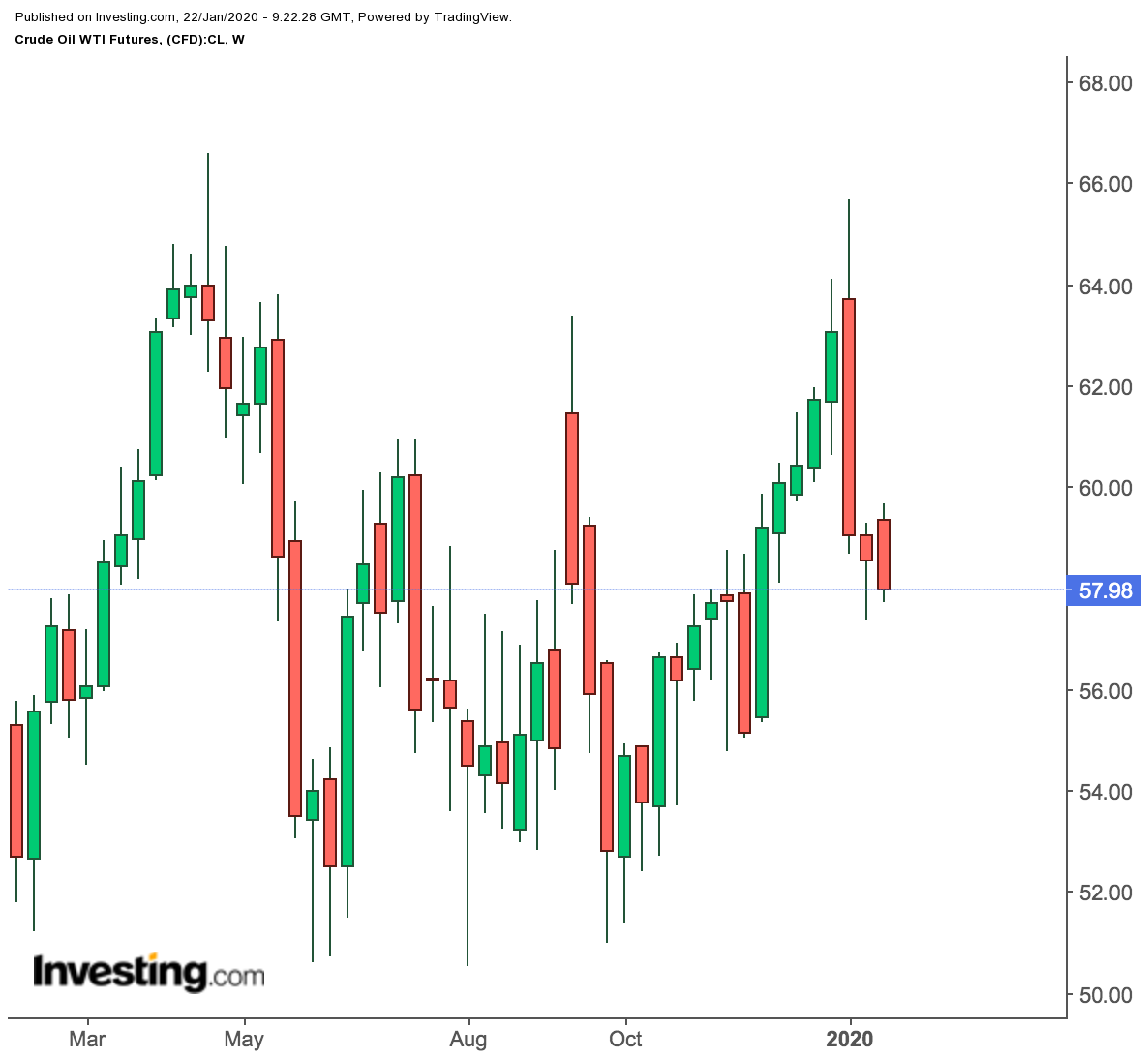 Asian stocks hard were hit hard, and and oil prices sank, as investors rushed into safe havens like U.S. Treasurys and German bunds.

So far there have been nine deaths and more than 400 documented cases, mostly in China’s Hubei province, which is home to Wuhan — the epicenter of the crisis.

Some analysts said while it’s still early, the virus does not seem to be as lethal as SARS, which killed about 10% of patients.

“For now, we are keeping our economic forecasts for this year unchanged, but the spread of the virus is clearly a major downside risk and we will continue to monitor the situation closely,” Capital Economics senior economist Gareth Leather was quoted saying by CNBC.

“We’ve got a curveball with this coronavirus. I think that’s a big deal. If you look at what happened in 2003, estimates ranged 0.5% to 2% in GDP for China, half a percent for Southeast Asia,” Jones told CNBC’s “Squawk Box” at the World Economic Forum in Davos, Switzerland.

“Stock markets sold off double digits. If you look at the escalation of the reported cases, it feels a lot like that.”