A new 2020 peak above $1,800 for has got the safe haven crowd all in a tizzy, as the bulls sense that the chance to notch new record highs is within their reach, after having waited for almost a decade.

Yet, as any seasoned trader or analyst will say, patience is a virtue that’s a must in the glittering world of gold, if not all commodities.

The new global wave of coronavirus cases and the debasement expected from the Federal Reserve’s of money into markets to prevent another economic seizure certainly put gold in a position to crack $1,850 and go on to revisit its all-time peak above $1,900. 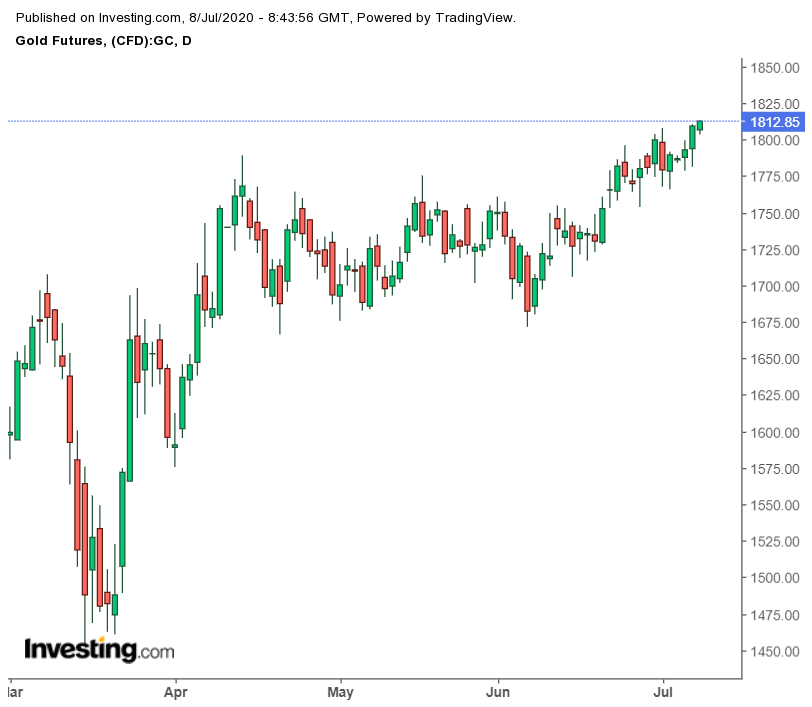 The capricious nature of gold—and the fact that it is one of the most liquid commodity markets—makes it possible for a $100 gap to be closed within a day or two under the most extraordinary of circumstances. But like the proverbial sword that cuts both ways, it can even snap back and lose all those gains—or more—just as quickly.

Christopher Vecchio, an independent analyst who contributes to Daily FX, said retail trader data on gold showed 66.57% of traders were net-long with the ratio of traders long to short at 1.99 to 1.

“The combination of current sentiment and recent changes gives us a further mixed gold trading bias.”

“We typically take a contrarian view to crowd sentiment,” he said, adding that the majority net-long in the market suggests gold prices could fall before extending the rally beyond $1,800.

Yet, Vecchio reasoned that if safe-haven buyers could prevent gold from slipping below $1,748, the next move higher calls for a rally towards $1,821.

“Support (for that) comes in at the daily 5-EMA (Exponential Moving Average), which gold prices have not closed below since breaking out on June 24.”

Like Vecchio, many appear convinced about gold’s “upside-intact” theory, but are still hedging their bets for an attempt at a record high later in the year, rather than in the short term.

Anuj Gupta, deputy vice president of commodity and currency research at Angel Broking in India, is one of them.

“Gold prices remain very close to their annual record, and analysts believe they won’t run out of steam,” Gupta said in an online post on Tuesday. “Within the next few months, the precious metal is expected to break its $1,921 historical record reached in September 2011.”

“The gold price is drifting sideways once again, but the overall uptrend remains firmly intact. A move below $1,750 would likely indicate some near-term weakness, but for now the most likely course from here is a push higher.”

Lofty Targets Are Still There

Many trading houses have lofty targets for gold, once it gets going past $1,800 towards new highs.

Goldman Sachs also forecasts that gold will reach $2,000 in the medium term.

Some of the predictions out there sound quite outlandish too.

For example, independent analyst Dan Popescu, has been quoted saying that he believes in $5,000 gold over the next five years.

“With (US) (Treasury) breakevens continuing to print new post-COVID highs, the normalization in inflation expectations may remain a powerful driver, lifting gold prices deeper into $1,800/oz territory,” analysts at TD Securities said in a note on Tuesday.

“And, looking forward, the world-war era fiscal and central bank stimulus, the change in the central bank template that will incorporate ‘symmetric inflation targets’ and unwinding globalization, also suggest that inflation-hedge assets may grow in popularity.”

Esper, in House testimony, says he had ...